Andrew Kay and Desert Song Festival are delighted to present The Song Keepers in Concert, the Central Australian Aboriginal Women’s Choir signature performance of Arrkanala Lyilhitjika, in two concerts only.

The Central Australian Aboriginal Women’s Choir has become a musical ‘tour de force’ since their historic and highly acclaimed concert tour of Germany in mid-2015. This unique Central Australian ensemble sings sacred music in the Western Arrarnta and Pitjantjatjara languages, two living languages of the Northern Territory and South Australia, together with new music introduced through recent collaborations with other Centralian and international choirs.

This concert tour coincides with the launch of the movie which is now showing in selected cinemas.

Desert Song Festival Director Morris Stuart and his wife Barbara, an accomplished artist featured in ABCTV Australian Story on 14th May. It is available on ABCTV iView to watch. Morris is the Musical Director of the celebrated Central Australian Aboriginal Women’s Choir, whose remarkable story is told in the movie and the Australian Story episode.

Having first been introduced to choral singing by German mission pioneers to the Western Arrarnta people of Ntaria in the late 1800s, this musical innovation was a natural ‘fit’ to a people with a long history of transmitting their culture, wisdom and knowledge through song and ceremony. In this performance, the Central Australian Aboriginal Women’s Choir tells a remarkable but largely unknown story of over 100 years of choral heritage and practice in remote Central Australian Aboriginal communities.

Arrkanala Lyilhitjika is a narrative musical work comprising a 90-minute choral performance accompanied by a multi-arts rear narration, telling the remarkable story of choral practice in remote Central Australian communities. This performance is a unique Australian musical conjunction: a union of Baroque and Romantic era choral arrangements, and centuries-old sacred poetry (hymns) held within the Western Arrarnta and Pitjantjatjara languages. Comprising of four movements, each containing hymns and songs which recall significant periods of the story, Arrkanala Lyilhitjika allows a conversation to emanate between the multi-arts elements of the performance and the choral arrangements sung by the choir.

Arrkanan Lylilhitjika will inform, educate and provide a rare insight into a vital but largely unknown aspect of Aboriginal culture in the Central Desert. With male musicians dominating the contemporary indigenous performance landscape, Arrkanala Lylilhitjika is a story of the cultural resilience of women, representing an unheralded aspect of contemporary Australian Indigenous musicianship. It is a testament to the resilience of Indigenous women in the Central Desert as they preserve and strengthen their identity, languages and culture through song. 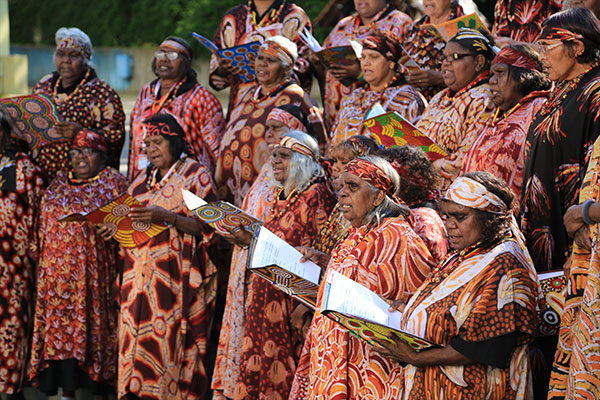